SLM Bodywork Myotherapy Treatment Youtube Video A patient with back pain is taken through a typical SLM myotherapy treatment and rehab program. 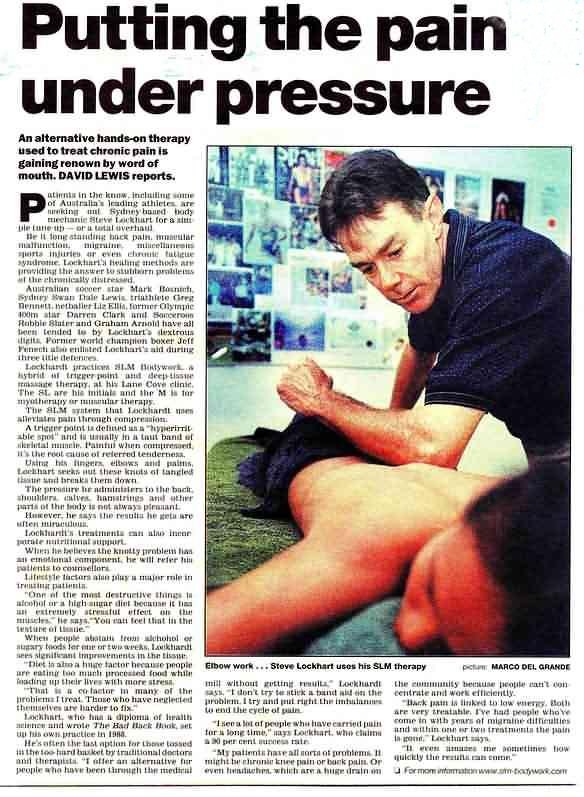 Putting the pain under pressure 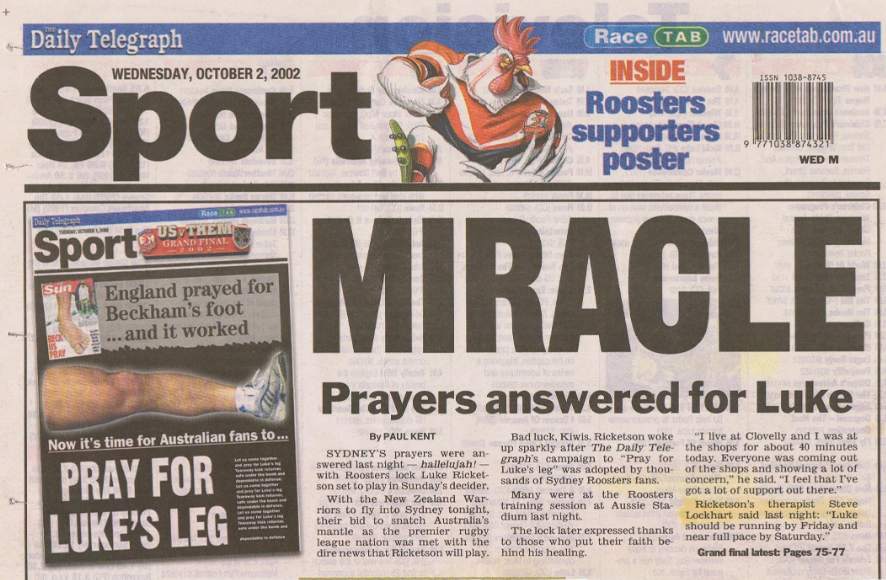 Grass Greener for Lockhart Sydney’s Daily Telegraph Sydney SLM practitioner Steve Lockhart flew to America in response to an SOS from ledgendary boxer Roberto Duran. He will act as the four times world champion’s masseur and dietician in the countdown to his bid to capture yet another world title on June 6th. 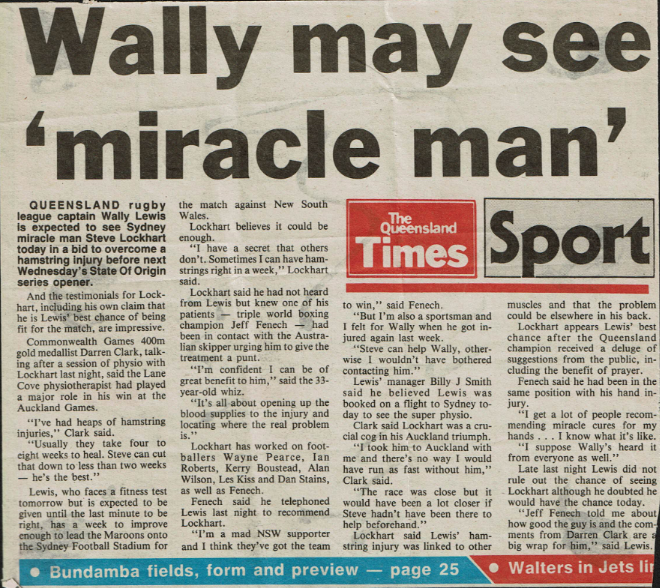 Wally may see ‘Miracle Man’ The Queensland Times. Queensland rugby league captain Wally Lewis is expected to see Sydney miracle man Steve Lockhart today in a bid to overcome a hamstring injury before next Wednesdays State of Origen series opener. In advising Lewis, Commonwealth Games gold medalist Darren Clark, talking after a session of physio with Lockhart last night, said the Lane Cove physiotherapist had played a major role in his win at the Auckland Games. “I’ve had heaps of hamstring injuries,” Clarke said. “Usually they take four to eight weeks to heal. Steve can cut that down to less than two weeks he’s the best.”

Roberts Amazing cure Sunday Telegraph The surgeon’s knife still hovers over him but injury plagued rugby league player Ian Roberts believes SLM has enabled him to side step the blade. “A month ago my groin injury was so bad I couldn’t walk, I couldn’t even get out of bed that is how bad it was.” “After seeing Steve I was back on my feet after only a couple of treatments.” 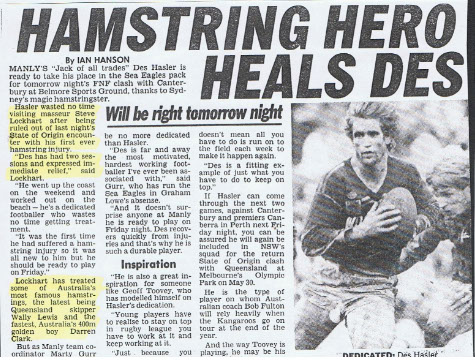 Hamstring hero heals Des Sydney’s Daily Telegraph Manly’s ‘Jack of all trades’ Des Hasler is ready to take his place in the Sea Eagles pack for tomorrow night’s clash with Canterbury, thanks to Sydney’s magic hamstringer. Hasler wasted no time visiting Steve Lockhart after being ruled out of last nights State of Origen encounter with his first ever hamstring injury.

Two Surfers back off their knees

Two Surfers back off their knees Sydney’s Daily Telegraph Newcastle’s Nicky Wood and Cronulla’s Richard Marsh will each make a comeback in this weeks $90,000 O’Neil l-IMB Masters at Cronulla after recovering from vastly different knee problems. Sydney SLM practitioner Steve Lockhart worked on the pair throughout the summer. 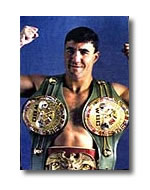 Leading Athletes beat a path to Steve North Shore Times Steve Lockhart of Lane Cove, Sydney Australia has been able to help an impressive list of top line sports people. With Steve’s help World Champion Jeff Fenech has been able to return to boxing. Sprinter Clayton Kearney has had his achillies problems solved after everything from a surgical stretch to muscle relaxants failed. Newcastle surfer Nicky Wood overcame knee problems that plagued him for over a year. Olympic sprinter Darren Clark, injury plagued for many years, is now enjoying injury free running and is consistantly posting the best times of his career. 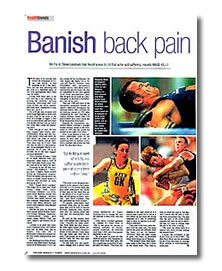 SLM bodywork is constantly being recognised by the media for its superior results at treating pain and injury, especially chronic pain. Steve Lockhart’s success and that of his students has resulted in a steady flow of work as people of all ages and lifestyles seek a solution to their pain problems after becoming disillusioned with conventional therapies and what so called specialists have to offer.This story in a leading Australian Sunday paper in June 2000 talked about Steve Lockhart’s success at treating Back Pain and resulted in hundreds of inquiries from people wanting to try an SLM treatment.Others wanted to know how they could learn the SLM techniques. A follow up story on prime time television resulted in an even bigger response and highlighted the urgent need for more training for therapists who treat chronic back pain’- The Sunday Herald, lifestyle liftout.